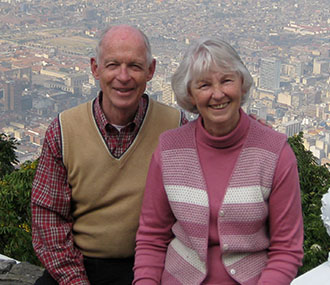 The provision of a pastor for the church La Alborda is an answer to prayer.  Watch this video to hear not only his testimony but also the testimony of the pastor who filled in while the church waited for a new shepherd.

New Pastor in La Alborada Colombia from ARBCA on Vimeo

Stan was reared in Carlisle, Pennsylvania, by parents who provided a good, moral upbringing and exposure to Scripture, but no clear understanding of the Gospel. Stan came to saving faith in Christ around the age of 12 when a pastor came to his church and effectively explained the Gospel. He was later called to the ministry.

Unhappy with the lack of evangelical emphasis at his family church, Stan joined Grace Baptist Church where he learned and grew to love the doctrines of grace. He studied for three years at Moody Bible Institute, with two additional years at Wheaton College. After completing a year and a half internship at Grace Baptist, Stan departed for Colombia as a member of The Evangelical Alliance Mission (TEAM).

Stan and Bev became acquainted at TEAM candidate classes in Chicago. Bev was a nurse anesthetist preparing for mission work in Zimbabwe. After corresponding for almost three years, Bev joined Stan in Colombia where they were married.

After serving in several teaching positions, Stan was sent to Pamplona where he began and pastored a small church until the Lines’ love for the doctrines of grace made it advisable to leave TEAM. They began to work with a small Colombian association of churches who were Reformed and Baptistic and moved to Bogotá where they saw a church established. At the request of the association, they moved to San Gil to pastor an older and smaller church. After four years, they returned to the Bogotá church which had continued to grow under the ministry of a Colombian pastor, Enrique Abadía, and now exists in three congregations with a total membership of 130.

Stan, as of January, 2003, withdrew from the administrative responsibilities of the Grace and Love Christian Church in Bogotá, but continues to work with Pastors Antonio Orjuela and Guillermo Gomez in other areas of the pastoral ministry. Three years ago Stan and Bev began the Library For Pastors where pastors may go to consult books they often cannot afford to buy. Once each month there is a meeting for pastors in the Library when the doctrines of grace are presented. The Lines currently hold a Bible study in a neighbor’s home as they seek to reach their new neighborhood with the Gospel. Bev assists Stan in just about every area of ministry and also volunteers as a nurse one day each week at the Children’s Heart Foundation.

The Lord has blessed Stan and Bev with three children. Shawna (1966) and her husband, Curtis Blair, joined Stan and Bev in Bogotá in January, 1993. Their three daughters(8,6,and 4 years old) were all born in Colombia. Brent (1968) and his wife Aimee, after two years of ministry in Bogotá, now live in Kennetts Square, PA, where they are seeking to plant a church among a large Latin population, mostly immigrants. Caleb, their two year old son was also born in Colombia. Dionne (1971) returned to Bogotá in 1999 and has been employed since then as a nurse practitioner in community health in a Children’s Heart Foundation . Stan and Bev rejoice to see their children walking in the Lord’s ways.

Because of the widespread influence of leftist guerillas, paramilitary groups, and drug traffickers, the safety of North American missionaries is a major concern. The Lines are committed to an ongoing ministry in Colombia and, despite the negative political climate, they hope the Lord will grant them continuing opportunities there during their retirement years.