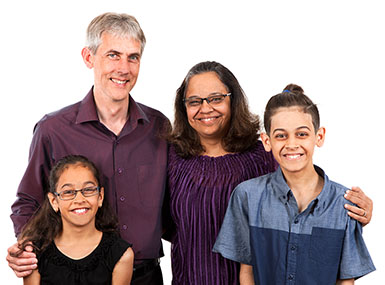 Dafydd was brought up in a Christian home in Wales where, at the age of eleven, he experienced God’s peace through forgiveness following some weeks struggling with the reality of his sin and the justice of God’s condemnation. A few months later he made a public profession of his repentance toward God and faith in Jesus Christ by being baptised in his home church in Aberystwyth.

Throughout his years in higher education Dafydd was active in church and Christian student groups. As a result of various opportunities for Christian service in these contexts a few people began to ask him whether he sensed any call to the Christian ministry. This sparked a prayerful interest in developing the gifts others had observed while waiting upon the Lord for clear direction.

Following college and a short time in secular work, he spent five years working in two different Christian organisations. During that time he gained valuable experience of church life and had increasing opportunities for preaching and teaching. Then came a period of full-time theological training at the Evangelical Theological College of Wales. At the conclusion of the course Dafydd was ordained to the Christian Ministry on 24th August 1996 by Dr. Eryl Davies, then the College principal, and the elders of his home church, Pollard Park Evangelical Church (now called Christ Church), in Bradford, West Yorkshire, and a week later he was on a flight from the UK to New Zealand.

It had been almost ten years filled with active service, painful lessons, serious private study and, finally, formal theological training, before the first sense of call in his teens at last became reality with his move to the South Island of New Zealand. Dafydd had been called to Christchurch to help with planting and establishing Grace Baptist Church, and he ministered there between 1996 and 2006. During that time he met and married Maria and God blessed them with a son, Ajinkya, in June 2005. Maria is from Pune, India, where she worked for a number of years for Grace To India, a branch of John MacArthur’s Grace To You ministry. Maria compiles Fellowship News, the quarterly newsletter of the Fellowship of Reformed Baptist Churches in New Zealand.

In 2006 Dafydd moved with his family to Palmerston North to help with another church planting endeavour, where the Lord also added a daughter, Anjali, to the family in September 2007. Palmerston North is in the lower North Island of New Zealand and has a population of about 80,000 people. Dafydd is the pastor of Crosspoint Church, which initially experienced five years of slow growth, but these were followed by five months of devastating attack by the evil one. The church is now small, but it is in good heart, and there is an air of hopefulness and expectation among the members as they look to the future.